Humane relocation, dog trafficking, the “Puppy Pipeline” — whatever you call it, the practice is still relatively unknown outside of the organized animal community and to a lesser extent, law enforcement and media circles. In case you are scratching your head wondering what we are talking about, here’s a handy definition from the NAIA Shelter Project Glossary:

Humane relocation: Humane relocation refers to the practice of transporting un-owned pets in need of adoption (primarily dogs and cats) from areas with a surplus of homeless pets to areas with a higher demand for pets and more shelter and rescue space. When done responsibly, it is a cooperative, common-sense method of finding homes for pets that might otherwise be euthanized. When done without care, it does nothing to solve the problem of pet overpopulation at its source, and in some cases even encourages it. Worse, it can turn participating rescues and shelters into unregulated pet stores that deal in animals of unknown backgrounds – animals that may have serious behavioral problems or may be infected with parasites and diseases not endemic to a particular region (e.g. whip worm, heart worm, or rabies).

But it is appearing in the news with increasing frequency as sales of these dogs increase:

Dog sellers present the canines with heart-tugging tales of Southern kill shelters. They also describe residents of the South as uninterested in preventing unwanted puppies through regular spaying and neutering.

This is big money: at $300 per dog, a rescue operation that does not give the animals proper medical attention or humane transport conditions can make $420,000 a year for 1,400 dogs, said Raymond Connors, an animal control officer for the state.

“It’s a multimillion-dollar industry,” he said.

Industry indeed — and it’s not just dogs moving from the south to the northeast, as is most often reported, it is a multimillion-dollar national industry. Using Colorado as an example, the number of dogs imported into Colorado shelters nearly doubled between 2012 and 2014, to more than 24,000 dogs per year! 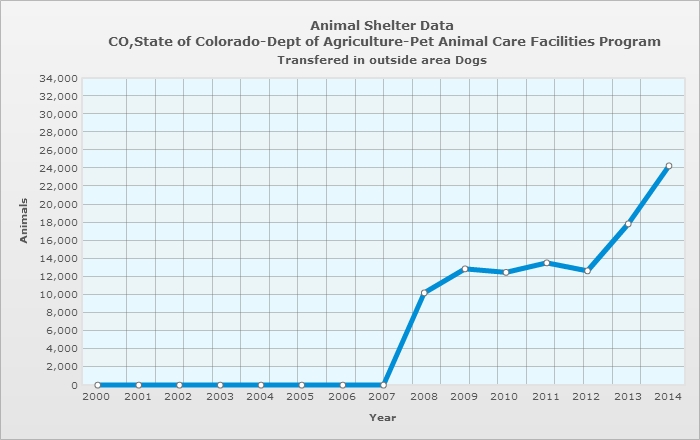 Given the unknown background, and behavioral issues of so many of these dogs and the way they are shipped, the issues of health, humane treatment, and consumer protection should be clear. The potential for this practice to impact the image of ethical rescue and pet ownership in general (e.g. avoiding rescues out of fear of health or behavioral issues, or deciding not to have pets at all) should not be discounted either.